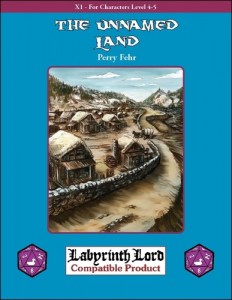 The charismatic wizard convinced you all that in the new land you could get a fresh start, that money and high birth couldn’t dictate what you could do. You burned the ship, built a town, and, with a few hundred intrepid colonists began to make a new life! The purple vegetation, eyeless animals and furtive crystalline inhabitants presented challenges, to be sure- and then the wizard disappeared…

This is touted as a hex crawl but is really just a starting base with some strong wilderness theming and a couple of plots in the surrounding lands. There’s nothing wrong with that, and it’s pretty well done, but it’s not a hex crawl. You might be able tot use this to great effect to drop in to Red Tide, NOD, or some other hex crawl. What you get is a small hex crawl map, a little detail on the local village, a “freaky’ wandering table with a fine selection of new monsters, and maybe four hexes detailed out of a 12×15 grid of 10-mile wide hexes.

The background is delivered in about a column on the first page. A wizard recruited a bunch of people to come settle in a new land. They boarded a ship, may have passed through a portal, and been in the colony for two years. Basically, this is a Jamestown settlement in a freaky deaky land that resembles more War Against the Chtorr than it does vanilla D&D. (That’s a compliment.) The Standard monster list is pruned down to most giant vermin, like crabs, scorpions, fly’s and the like, ooze-like things (ooze, slime, cubes, mold), a fungus or two (shriekers) and some of the weirder and more insect-like monsters, like a rust monster or eyeless wyvern. This is supplemented by seven or eight new monsters, all with a very weird, aliens, or insect-like theming. Not insects, but evocative of insects. Not hive mind creature, but evocative of hive-mind creatures. Notably, there are two intelligent crystalline humanoid races: the greens and purples. Ubarat Fel, the wizard leading the colony, disappeared awhile back n an excursion he claimed would get rid of the predator attacks the colony was facing. These green and purple humanoids are roaming about. The land is crawling with weird monsters. The colony-village proper has a very Battlestar Gallactica-vibe from back when they had that colony; lot’s of corruption, pettiness, and the like. In short: a perfect place to getting kicked off!

EXCEPT for the hook. Note the adventure is for levels 4-5 and the adventure starts the party off in this weird-land-beyond-a-portal by having them standing beside a fountain. That’s it. No starting hook. I’m having trouble rationalizing a complaint about this. DO you need a hook for a starting base and a hex crawl? It’s location based; you shouldn’t need much of a hook. EXCEPT … you’re starting at levels 4-5 AND you’re starting in a weird “not vanilla D&D land.” How did you get there? Did you level up in the village? Were you an original colonist? Did you somehow in this mega-isolated place after the fact? If so A LOT of people are going to want to talk to you about getting back. This is a nice sized hole in the product.

The only village on the planet (is it a new planet? Who knows … and that’s great! Except for all intents and purposes you can think of it as “the only village you will ever see”) has no map, a strong rumor table, and a description of about a half-dozen places. Group dorms that the 400 or so colonists live in, to the wizards tower, to the food stores, communal workshop, and meeting hall. Each one of these has something going on, usually personality/NPC. These entries generally last no longer than a paragraph or two and do a great job of conveying a location with lots of possibilities. The asshat cleric, the ONLY cleric, is now pretty full of himself and if you want healing you have to attend his lectures and declare your faith in his god. And he’s kind of a doomsday preacher AND has a decent number of followers. Joy! The perfect gas for throwing PC fire at! A dick thief is in charge of the food stores, using “indentured servitude” as currency with thug guards and pretty girls working for him. He supports any mining-type venture, since he REALLY wants to get rich. One of the communal dorms has a different thug thief as a self-appointed Dorm Warden, with her room having the only separate room … and lock. She’s the sometimes rival of the other thief in town, the guy at the food stores. This kind of stuff goes on and on. The wizards tower is arcane locked and his three apprentices are camped outside in tents (none having knock) arguing about who is new archmage. (They’re all level 2.) EVERY place in the smallish colony is like this. It’s a fucking powder keg . It’s PERFECT. My only complaint is that a small list of the core NPC’s and goals would have been nice as a reference, maybe with a few more of the townsfolk thrown in also. That sort of “reference material” for running an adventure is something that is generally missing, especially from village/social places, and is sorely needed most of the time in actual play.

The hexes suck. You get a short 8-10 entry wandering monster table for each type of hex (wooded, plains, etc) and then 6 “special encounters” of two sentences each. There are three other special hexes detailed: the hex where the wizard met his fate, the lair of the green men and the air of the purple men. The purple men get a page or two but the other two get maybe a column. Which is fine; that’s more than enough to communicate the vibe of the hex and give me enough eta to run it. The issue is that this isn’t a hex crawl, not in my definition. It’s a kind of Wilderness Clearing action, where you go from hex to hex killing some wandering monsters. There’s just not enough “traditional” hex crawl encounters. The whole adventure is like a coiled spring, full of potential energy, but sitting out by itself alone in a field. Without the hex crawl encounters the potential energy is wasted. The set up is good. The new monsters are good. The village is good. But it’s all fluff without an opportunity to use it on something. That’s why, in my introduction, I stated that it would be better if you dropped this in to an existing hex crawl. It needs the target, the goal, to be released at. “Well, you could make your own.” Yes, I could. Then why am I buying this? The very purpose of a purchased product (or a free one, for that matter) is to support play. We’re paying, money, time or investment, for the very content that is missing. Not to mention the traditional problem of the product not advertising what it is very well.

There’s one more problem with this that is acknowledged by the designer: XP. There is no coin in this new land. It’s suggested that you give 4-5x more XP for creatures killed and 100 XP per hex cleared. This turns the focus to killing and clearing. BASIC doesn’t do a great job at kill-based gaming and 100xp hex means A LOT of hexes must be cleared before level 5 or 6 is hit. It’s probably impossible. This alien land would also be ripe for weird new magic items, things, but that’s not present at all either.

This thing is $4. If it were cheaper it would be an auto-buy. If it was more of a hex crawl it would be an auto-buy. You’re paying $4 for a little village, a general set up, and a couple of sub-plots. I’ve paid a lot more for a lot less. I’m hesitating recommending this, probably because I’m disappointed I didn’t get the hex crawl I was anticipating. Fuck it. It’s worth at least as much as a beer. Go buy it.

3 Responses to X1 – The Unnamed Land