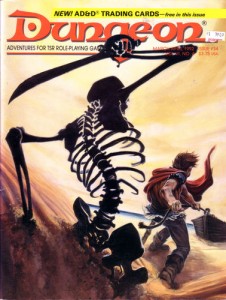 This is an eight-room cave with a couple dozen drug-addled tasloi. It is also once of the worst examples of adventure design I’ve seen. A kid comes out of the forest crying. Questioning turns up his friend Drake is missing. The kid runs away. That’s it. That’s your hook. And this adventure is recommended as the Premier Adventure for your new campaign. Sigh If you follow the kid you get to his parents house. They are complete dicks and won’t talk to party or allow them to talk to the kid, other than shouting “Go Away!” This is your premier adventure. Why would anyone go on this? Because that’s what the DM is running that night? That’s the reality of the situation, but, fuck, you have to make the adventure at least A LITTLE appealing to the players and characters to go on. A vague statement and then denying the party anything else is not a great start. The group is then supposed to wander around the forest looking for clues. Except they will probably fail and/or give up. There’s a 10% chance per party member of finding a clue. What if they don’t find a clue? I guess they don’t get to go on the adventure then. Yeah! Let’s Oh, wait, I don’t think that’s the reaction you are supposed to have. I’ve never understood this shit. If you HAVE to find the clue to go on the adventure then why are you making people roll for it? “Roll 1d6. On a ‘1’ you get to play D&D tonight.” Ug! Further, the clues are bullshit! There are three. The first two provide NO insight on where to go. The third, it is stated repeatedly, should only be used if the party is getting frustrated and don’t know where to go. Seriously? YOU HAVENT PROVIDED ANY DATA ON WHERE TO GO UP TO THIS POINT!!!!!! Eventually you find a cave. The first encounter in the cave takes a page to describe. It’s a fucking pit blocking the entrance with a fire behind it. That’s should tell you a lot about this adventure. It’s not the only example either. Many of the encounters take a page to describe and subjects are not just beaten to death but to a pulp. When you find the fairy dragon (euphoria gas) captured by the tasloi it breathes on you up to a dozen times. Hey! Dick! Know how many XP you’re worth? I’ll answer that: more than the bullshit excuse for treasure this adventure provides! There’s almost none at all. The concept of drug-addeled humanoids is a good one, and there’s a great non-standard undead, but that’s not enough to save this adventure. Garbage.

A two-page side-trek that describes the clearing in which a rogue elephant lairs. There’s nothing remarkable about this. Two pages to describe what should be a couple of sentences or a (short) paragraph. Was Dungeon that desperate for material?

This is a small little locale adventure on an island. Some mariners (a guild, perhaps?) hire you to clear the place out so they can build a new lighthouse. After getting on to the island, through a horde of undead, there’s a little adventure in the cellar of a ruined abbey where you meet the remains of the evil clerics from the abbey. This adventure has a different vibe than most and it’s something I can get in to. The party is presented more as a group of mercenaries. A lot of hooks essentially imply as much: “you’re hired to …” but there’s also some implied morality in most. This one doesn’t really have that implied morality, although it’s still essentially a fight against evil. The mariners want to build a lighthouse and they need someone to check the isle out before they do so and get rid of any threats. There’s a small lighthouse nearby that can serve as a base of operations, and it has a tactical resource in an old fighter who tends it. He can offer advice to situations the party can’t overcome. That, alone, is unusual for Dungeon. Not the resource, but the way the adventure is presented. The island is presented more as a … location? Than a set of railroad encounters. The beach is full of undead that crawl out of the dunes, so just getting off the beach will be a puzzle. The ruined abbey has some (evil) survivors in it who, generally, want off the island. They are presented as having motivations of their own and you can talk to some of them. More could have been done with that, with some better faction play, but at least a nod is given to a couple of people who just want out and damn their evil god. Hell, I even liked the little backstory of the pirates and clerics being in league, the clerics always shorting the pirates, the pirates always grumbling, and then the pirates showing up one day to burn down the abbey … only to get mostly wiped out by the undead … leaving an opening for the mariners guild. The treasures here’re not stellar, and more could be done with the NPC personalities in the ruined abbey, like sticking them in specific locations or putting a little more faction work in to play, but it’s defiantly above average for Dungeon.

Are there good nazi’s? What’s your position on orc babies? This adventure, either intentionally or unintentionally, asks those questions. A warship from a thus-far unknown empire shows up and raids a city, kidnapping all of the adolescent elves. Because their empire uses young elves as slaves. And keeps them drugged. And breed them. But they are not evil, the adventure says so. Seriously. “Slavery in the Dkdwfkd empire is not good or evil. It just is.” And their alignment isn’t evil, it’s almost all LN. It then paints the crew of the ship as just a set of sailor dudes. They hang out in bars, spend money lawfully, arm wrestle, gossip, all the things sailors do. Well, and slave adolescent elves. The depiction of a foreign power suddenly showing up and raiding a town, only to pull in to another and act lawfully, that’s an interesting depiction. Probably realistic. Depicting the crew as just a bunch of sailors, a bunch of working stiffs, and the offers who are just loyal military officers. All great. You get a couple of combats with a well organized military group painted in a realistic, and yet tactically fun, manner. And then you toss in the orc babies … the slavery. DM’s you throw that shit in are not good DM’s. They are dicks. The game is supposed to be fun not make you think about the meaning of life, hopelessness of existence, and put you in to existential crisis. The big battle at the end is supposed to be on the warship but it described in a boring way, with no thought as to how the crew react to an incursion. This is in marked contrast to the earlier ‘ambush’ encounter in which the tactics of a small subset of the crew, on land, are spelled out. The ship, in contrast, is boring, with no tactics and nothing very interesting to explore. This then is the most glaring mistake in the adventure, the abrupt turn away from the realism of the military response to Just Another Keyed Room format. Oh. And the adolescent elf slavery. Like I said, only a dick puts that shit in an adventure. The TSR standards were something like “evil must never be portrayed in a good light.” I guess this one slipped through because they were LN? I look forward to the next issues letters column to see if this comes up. Ultimately this is a sucky adventure because of the main encounter, the ship, is described as just a series of keyed entires instead of living, breathing place with a crew schedule, etc. The orc baby issue is what pushes from “the usual dreck” to “total piece of shit.”

Dungeon adventures tend to be wordy. This one is both wordy AND confusing, a rare talent. The party is hired by a manor lord to go kill a predator killing livestock. Uh … then the party is attacked at night by “Darkenbeasts” under the control of Vedthor. Then they go kill a small campsite of enemies in the pay of Vedthor. Then they go to an estate and kill some more people in the employ of Vedthor . Yeah, I know it’s a mess. That’s because it’s a mess! So look, what’s going on here is the designer made up a cool dude, Vedthor, and put him in an adventure in Dungeon Magazine. Vedthor, the CE human male wizard, keeps a +3 dagger in his boot and a knife in his left forearm sheath. Boner much Craig? Vedthor has some evil plot and its his Darkenbeasts that are causing trouble. The idea is, I guess, that the party is pissed at being attacked during the night ambush by Vedthor and takes the fight to Vedthor. You see all that name dropping I did of “Vedthor”? That’s NOTHING compared to the number of times he’s fucking mentioned in this adventure. “Why Bryce”, you ask, “how does the party know where Vedthor is?” Well, first, let me thank you for name dropping “Vedthor.” Second, there are a bunch of fucking owls in the adventure. Why are tere owls in the adventure? I have no idea. But there are a bunch of giant owls at the enemy campsite and one talking owl in a cage at the campsite. And the talking owl has a page long monologue that fills the party in on all the details. And then every encounter from then on is written from the owls point of view. If some DM tried this shit on me I’d eat the fucking owl. There’s a couple of nice things in this adventure, in spite of the confusing mess it is. First, at he campsite, there are some hill giants chasing around some giant owls, trying to club them, while the owls flutter about from area to area. I like these sorts of vignettes during an adventure encounter. It’s much nice to see some semblance of realism then it is to just have a boring description of “3 hill giants in the clearing.” It doesn’t have to be long but just an extra sentence or so can make all the difference. Second, the estate at the end, while written from the owls point of view and a total confusing mess, tries to be an open-ended location. More than a standard keyed encounter locale, it tries to tell you that there are some guard at a lookout on the hill, and these guys on a boat, and these people in the house and so on. It fails because of the owl POV shit and the TOTAL lack of a plan and/or tactics on the part of the enemy. Oh! Oh! I just remembered! At the end of the adventure there’s an entire list of consequences based on the PC’s actions. Guess What! Nothing you do matters! No matter what the party does the outcomes are the same! Yeah you! You wasted your time!