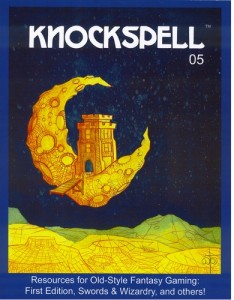 This is an adventure by Jason Sholtis. That’s all you need to know. End of Review.

What? You want more?! Geeezzz… I already said it was by Mr. Dungeon Dozen, my FAVORITE blog on the net. Hmmm, it occurs to me that my Favorites generally get ignored on my review blog. That’s too bad. People like Sham, Melan, and Jason have a shit-ton of talent and I should review more of their stuff. Anyway, back to this one by Jason.

The very first two words of this adventure are “Gonzo Alert!”, and gonzo it is indeed, although somewhat less than ASE1 and more weird than ASE1. It’s an adventure in a small section of the Mythic Underworld featuring super-deadly monsters, rival parties, and a metric ton of weird and unique stuff. Exactly what you would expect from the guy who writes Dungeon Dozen.

There’s a page and a half of background material presented. Wonderful background material full of things like The Null-Rod and The Worm Sultan. It boils down to the Prince stealing a McGuffin and the party being after it/him. The usual issues with a plotline like this are addressed: the Captain was sent after him with a sizable warband. Which attracted too much attention and were slaughtered, according to the one half-insane survivor right “before rescinding his citizenship and disappearing in to the night.” Now THAT’S something to work with! It provides an excellent picture of the survivors state AND does a great job communicating the danger of the mission to the party. The adventure is meant to be a one-shot so we can ignore the usual list of issues I have with parties being sent on missions. It’s also possible that the story has slipped out and the party hears of it in a tavern and seek the riches on their own … which is a great way to introduce this without the straightjacket of the mission. There is a GREAT selection of NPC hirelings offered. They have exactly one line of flavor text each and that one line does wonders for a DM wanting to run them and give them character. Chuthok (another ex-Zao warrior, mystified by much in the world outside of the scope of his tribal culture): Phlonx (son of a local settler, nervous and likely to bolt under duress): Q’tang (a steady bowman currently dedicated to staying drunk when off duty): Oothu (brave and loyal expatriate warrior of the Zao people, a tribe of hill barbarians): That is a GREAT batch of guys to take on an adventure. There’s more enough in those four sentences to perk up any lull time in the dungeon. That is the perfect amount and type of detail needed.

What follows this introduction is a bit strange. Seven and a half pages of text describing the environment of the dungeon and other referee notes. The first page or so is the actually background information. Some of it is advice, some of it is an explanation of the Mythic Underworld, some details about the McGuffin, some advice about character deaths and so on. It’s full of good advice but much of it feels extraneous to me. Perhaps as an introductory adventure to S&W style it’s appropriate. There’s more good stuff here, a variety of petty gods in Sholtis S&W style. The invisible giant that eats soldiers and evidentially poops out undead is a nice touch, as is the floating glowing giant ball of snakes. This ain’t 2E Dorothy. The dungeon entrance proper is in a cavern at the base of a tall cliff, with a hole in the ground and an iron ladder descending 1000 feet. This is common in Mythic Underworld settings. The barrier to be crossed from the real world to the dungeon is a clear one, there’s no mistaking it at all and every PLAYER knows adventure is RIGHT THERE.

The rest of the background is devoted to random encounters, random events, and competing adventuring parties. Sudden blackouts, weird whirlwinds, seismic gas, cave lightning and the Procession of Skulls compete to freak out the players. This, alone, makes the adventure. Again, THIS IS A DIFFERENT PLACE is clearly communicated. These are all great encounters, especially the skulls. But wait, that’s not all! There’s also the competing parties! How about Professor Zabon Gormontine, the Robot Master? He’s got a death ray and a couple of terminator-like robots with him. And is from 3000 years in the future. And his goal is the total destruction of all organic life. Uh … I said Gonzo, right? There’s also Dr. Thontorius, the bear man. He’s also from the future. He was the professors office-mate. And then there’s Solgum the Resplendent, an arch-mage sorcerer on the rise, along with his newt-men. Oh, and the snake-thingy petty-god, Thrantrix the Ineffable, who may recruit the party to it’s cause. That’s a lot. But that’s not even the wandering monsters! Mind-bats, fibre-bomb beetles, flaming hounds, martian ape, Hrrk and Krrg, Twin Princes of the Magmen! Psychotic Cyclops, Chaos flies hauling carrion! Did you go buy Knockspell #5 yet? No? You’re an idiot. This is one is GREAT and I haven’t even gotten to the encounters yet!

How about some of those encounters, eh? How about the googolpede, a seemingly endless giant centipede coming out of a hole in one wall and going in to another across the tunnel. Gotta jump it to get by! Or maybe you’d be interested in the trail of dead underworld horrors left by the Prince and the Captains warband? You SHOULD be following those. I especially like the maggots crawling the skin and the inrush of giant centipedes to feed on them if the adventurers free the maggots from one of the corpses. Sweet! Anyone want to tranport to the future and deal with the paparazzi in the broom closet of the office the Professor and Dr left from? Or explore a space ship? Or maybe have a friendly chat with two fungus-men gossiping with their Mantis-Devil buddy? With only 15 encounters this place is packed FULL of stuff to mess with and explore. It’s insane how much is packed in to here. The actual adventure shouldn’t be too hard as long as the party remembers what they are in the dungeon for. There’s a LOT of 20 HD dudes running around … messing with them is a 1-way ticket to the Procession of Skulls. But they are really just a big red button/trap. Everyone knows you shouldn’t mess with that stuff and since they aren’t immediately hostile they are more like traps than combat encounters.

The monsters are, as previously described, almost all unique. Those guys that memorize the monster manual are going to have their heads explore. I LOVE new monsters, especially in a setting like this, since they do a great job further communicating the unknown and bizarre nature of the environment the party is in. The magic items, and the place is thick with them, are a great disappointment. +2 battleaxe. +1 chainmail. +2 shield. Ug. This is one of the few areas in which the adventure could be improved. Tossing in normal magic items after all the group has seen is SUCH a let down. I’m not sure what happened here … it’s almost like they were thrown in as an afterthought.

This is available on DriveThru. AND there’s another, standalone version as well, that augments and expands what’s presented in the Knockspell version.