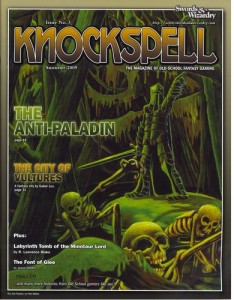 A decent little romp through a pyramid ‘labyrinth’ dungeon, complete with minotaurs. It’s got a heavy trick/trap ratio, shit that don’t make sense, and is a wonderful little place to adventure for an evening or two. It’s doesn’t have a weird or OD&D vibe but it does bring the BASIC nostalgia.

The map is sufficiently complex to screw with the players. Generally two exits from rooms, dead end hallways, branching hallways, teleporters, etc. The map LOOKS like a labyrinth without looking like a FORCED labyrinth map, if that makes sense. I have no idea how that translates in to play but I’d guess it’s reasonable to assume that the players will get the labyrinth vibe. There’s a small amount of other features on the map also. Mini-pyramids, giant pits, small pits, statues, rubble, cobwebs … it helps break up the monotony of a map. I mentioned above that there are things that don’t make sense. I’m going to complain about that exactly once and then let it go. The inhabitants are a pain in the ass. Minotaur guards, dopplegangers, and shadows. WTF are they all doing living in harmony down there? How do the minotaurs get in a& out and why do the undead not kill them? Makes no sense. Ok, bitching complete. I shall now ignore it and/or place it in the ‘nostalgic charm’ category. Still, with wanderers showing up every hour with a 60% chance, there are a lot of the bastards running around the place.

The encounters are pretty much all some derivation of the classics. A giant bronze ball rolling back and forth in a hallway. A room with a sunken floor covered by fire and a small ledge around the pit, with a statue at the far end. A pit with a jeweled scepter in it; pulling it causes a stone block to drop in to the pit. A room with a well in it and skeletons manacled up to a wall. CLASSICS. I LUV the classics. At nine or ten encounters to the page they provide a decent amount of detail without going totally overboard on descriptive text, which is just about how I like it. I’m not sure how to describe the feel of the place. It’s almost like a funhouse dungeon but it doesn’t go over the top the way, say, Inverness does. But there’s still a lot of strange shit all thrown together down here just because it would be fun to play through. Oh, and it’s got a torch in a sconce that, once removed, opens a secret door. BAD ASS. It’s not a joke dungeon and the actual rooms don’t feel all that forced.

The treasure is mostly plain old stuff: ring of regeneration, 10 pieces of jewelry worth 100gp each, wand of cold, etc. All book, all boring, all generic. I like my treasure with more descriptions and more non-standard. This is the most disappointing part of the adventure for me. Instead of boring old coinage there could have been small bull-headed idols made of ivory and gold, or maybe even some kind of … Golden Calf? That would have been good for a laugh. If I found a golden calf in D&D I’d mount it on top of my house and place guards around it to show it off. Now THAT would have been cool treasure. Mosaics of jewels on the walls, or maybe silver plate to salvage, all of that would have been cool. Similarly, portions that grow minotaur horns, or horns of minotaur summoning, or iffy-phalus idols, those could have been cool magic items. Instead we get “1 gem worth 150gp” and “wand of cold.” SAD FACE

I like the encounters here. Maybe it’s just nostalgia or charm, but this seems like a great little thing to pull out and just play D&D.