Adventure &1 – The Valley of Eternal Rest 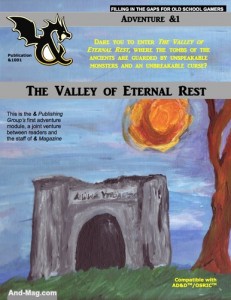 Dare you to enter The Valley of Eternal Rest, where the tombs of the ancients are guarded by unspeakable monsters and an unbreakable curse?

This is an adventure compilation featuring tombs in a burial valley. Their quality varies, as is to be expected from a compilation product. Three of the twelve encounters stand out for various reasons with the rest being just simple little tombs. One good inn encounter, one good weird encounter, and one good “roleplay” encounter.

Compilation things are hard to review. They typically vary wildly in style and quality and that generally makes it hard to recommend one. This one helps solve that particular problem by being free. So, need some standard D&D tombs with traps and undead? This is your go to product for “normal” D&D tombs. Each one consists of just a few rooms, three or four being typical. There will be a few traps and a few undead encounters and some generic loot and then you’re off. Scatter them in a hex crawl or place them in ‘The Valley of Eternal Rest.’ You’re going to have to work to fill them in enough to make them interesting. That doesn’t have to be bad … maybe that’s the way you like to operate. I like a little more … fluff? on my encounters. An idea seed or some such that can help me be inspired to turn the words on the page in to something more than the sum of their parts. Most of the tombs here fail in that regard. Speaking of tombs in general, they can be hard. They are linear, they generally only have undead or constructs and traps. Not much going on in them. They usually feel more like a contest between a devilish DM and the players, and that’s uncool. I suspect it’s not on purpose but rather just the nature of trying to use logic to build a tomb. Interesting intelligent undead or a more cohesive sandboxy location (Fallen Jarls) can help mitigate the issues, as can decent fluff in the tombs and interesting non-standard and magic items. That’s generally not found here. The writing is pretty uninspiring.

Except for a few.

One of the tombs is The Mother of All Worms. It’s full of worms. Tens of thousands of little green worms with little mouths. They die in the light and are thus confined to the cave. Annnnnndddd….. GO! I like this kind of set up. It doesn’t seem like it’s the DM verses the players but rather that there’s a kind of natural environment thing going on here that the DM is adjudicating. Fireballs kills 1000 at a time. Torches kill 10d10 per round. I wonder what’s in the cave? More worms. 🙂 A REALLY bad pit trap, since the worms fall down on top of you. Ouch! Probably one of the best traps I’ve seen and an excellent example of how to re-use a classic trap. There’s a giant worm in the cave giving birth to the little worms. Killing it will cause another little worm to turn in to a Mother worm. This is a classic D&D set up and is exactly the sort of thing I like to see in an adventure. It’s weird, it has little to no explanation, makes a certain twisted kind of sense, and is just a place for the players to overcome. The treasure sucks and is plain jane ordinary, and there’s not enough of it, but the encounter proposer is excellent. A little lengthy for what it is, but a great idea. Sons of Kyuss now make sense! This is the only encounter by ‘Varl’ in the compilation. Too bad.

There’s another tomb described that has a rival party near by. Just a group of lay-about lazy ex-soldiers looking to be left alone so they can make a buck looting a tomb. The tomb is not interesting but I like the rival party, especially since they are all essentially 0-level men-at-arms. They have some tactics they use to scare people away. They have a general ‘group’ personality that controls how they react to things. Things like this are what can turn a boring collection of old musty tombs in to a dynamic location with challenges day and night. Yeah, there’s wandering monsters in the valley but those have no heart and no inspiration. These guys, by their very existence and brief write up, are TEEMING with possibilities. That’s exactly what I’m looking for. Things I can use as springboards to make the characters lives more interesting and the players night more fun. Sure, the individual guys have no personality but the groups tactics, lengthy though they be, cab provide some real fun. It can help provide a kind of seamless environment where the adventure doesn’t stop once you come out of the tomb. Day and night there’s something to tie events together.

The last interesting bit is an inn, although that may be personal preference. I have no idea what it’s here. It serves as a kind of introduction where the players can find a map to the valley but it otherwise completely out of place. It’s cool, but not as a part of a whole. Essentially, a roadside inn has been taken over by a couple of devils. They hang out in the basement and have turned everyone in the inn in to undead, ghouls primarily. Not too obvious on the surface, but clear after awhile. I LOVE a bold lie. “I never drink wine!” OMG!OMG!OMG!OMG! You KNOW thee’s something bad about to go down with a bold lie. Sometimes the players play along. Sometimes they execute every last one of the folks. With enough misdirection in the campaign you can keep people on their toes and make the bold lie more fun. I do this a lot in my games so when something like this inn pops up the players are usually trying to decide if they should look in to things more, ignore it, burn the place down, or just kill everyone. Choices & Options. Choices & Options. So, weird stuff going down at the inn. Zombies in the barn. Ghouls as some of the staff. Other staff charmed. And a couple of lard-ass cowardly demons in the basement living off the inn ‘profits.’ It’s a sweet little set up. Again, a location that the party can explore and don’t just have to hack their way through. I’m not even sure what to call this. Open play? Sandbox? SOunds like it’s time for a forum thread.