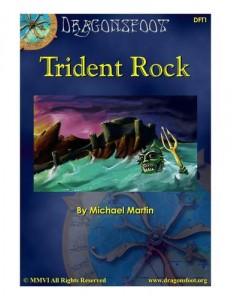 Can you unravel the mysteries of the island of Trident Rock?

This module gave me a headache. This review is not going have the pretense of being objective.

An Investigation? A social adventure? A dungeon crawl? A mess of a module. It’s laid out ok but the various sections don’t tie together well. Nor does the introduction tie in with the rest of the module. It tries to do too much and ends up not doing very well at any of it.

There is this noble family that lives in some ruins on an island. They are cursed to live on the island forever, dying once they leave it. Most of them are super duper evil, according to their descriptions, and full of plots and schemes. Each of the eight named NPC’s get a paragraph of explanation in the front of the book and some stats in the back. The DM is warned time and again that these are complex people and that they should be very familiar with them in order to run the complex set of interactions that the module has.

Wait, let’s back up. Why is the party on the island in the first place? No reason. No pretext. Nothing. It’s an island out in the ocean and the party is there. It’s implied a couple of times that the party is there to investigate/break the rumored curse. WTF? So I’m sitting at home one day having some beluga and six dudes with guns show up and say they want to hang out and investigate the Bryce Lynch “Bad Module” curse. Can I put them up for a few days? Huh? And I say Yes?!?! Oh yeah, and I’m super rich and live in a burned out shell of a house. Come on man … Oh, and the party is randomly attacked by gnolls and ghouls while in the lands around the ruins on their way to the ruined castle. That’s background information. “You’re randomly attacked by an increasing number of ghoul and gnoll groups on your way to the castle.” You know why I fucking hate read-aloud text? Go ahead take a guess. Did you guess “Because it has this kind of stupid background railroad shit in it Bryce?” If that WAS your answer then you’ve read too many reviews. So, no reason why the party is on the island or at best a silly one, an implausible reaction from the “complex” NPC family and a bullshit off-stage background journey. Joy.

Back to the family and NPC’s. They live in the remains of a ruined keep. “Ruined” as in “less than half of the buildings have not collapsed in to rubble”. Noble family … Right. Anyway, the family members each get a short paragraph of description that does almost nothing to help the DM. Bob is evil. Ok. Dan is scheming, gruff and grim. Frank like to plot and scheme. Betty is tricky. That’s the extent of it. No details on what their evil plans are. No schemes or plots for a DM to work with. Just a simple notation that they are Super Not-Nice people. “Dan will work against anyone who attempts to sabotage his plans.”” WHAT FUCKING PLANS?!

Up till this point you might be thinking this was a social adventure with lots of NPC interaction, etc. Well, no. The module says it is but does nothing to help the DM. One short paragraph per NPC, not plots or schemes, no details anywhere else in what the family is up to or how they react. Tra la la. … you see, this is actually just a slaughter fest. Pure. And. Simple. Hack. It terrible. It’s like I presented stats and maps for the people in a one-block radius of your house and said “Go kill them!” WHAT?!!? Oh, and the ruins? There are bugbears, ghouls, and a demon in them. In some cases LITERALLY right next to a building people live in. It’s insane. So, ok, after the NPC’s we start to get location descriptions in the module. Some for the Keep, some for the Goal, some for the Tombs, some for the Dungeon. Location descriptions involve something like 2-3 LONG paragraphs of read-aloud text followed by 3-4 paragraphs of DM only text, two or maybe three rooms to page. Seriously? People still do that? Oh, Oh, and the guards in the first two watch towers the party encounters have “magic gongs” that when rung alert everyone in the keep/ruins. And do they all have magic amulets that prevent ESP type shit also?? Oh, no. They all have magic amulets that prevent them from being attacked by the undead on the island. I SINCERELY feel sorry for people who A) Learned to play D&D this way B) Still play D&D this way.

Gaol is under the ruins. 29 rooms, most of which are empty cells. Demons, bugbears, ogres, jailer with Iron Bands of Bilarro, neo-otyugh, roper, minotaurs in a maze, rust monster & disenchanter room, water weird. Not even an attempt to put something together here. Just a seemingly random assortment of monsters that show up in the dungeon with some bullshit explanation. “Evil Bob brought the rust monster and disenchanter here to get rid of adventurer equipment.” DON’T TRY TO EXPLAIN THINGS! The statue talks BECAUSE. Fire envelops you BECAUSE. The sorcerer shoots red beams from his eyes BECAUSE. Don’t tie a spell to it. Don’t try to explain why magic happens. Fucking Victorians.

A dungeon? Yes, 24 rooms! What’s in it? Sahuagin. Margoyles. About a dozen other monster types. The map kind of looks like a tourney map, with a few sections to it. It’s the most interesting part because there are a couple of environmental features. A hallway alongside a chasm. Flooded areas, a decent classic trap or two. I love a classic trap. It’s like a big red button. “The rooms has holes on the floor and ceiling, you say? Please, Mr. DM, give me some pretext so that I may enter.” There’s a devil down in the dungeon, the last member of the family. And nothing about the family curse that I can see. Since the family gets pissed when you mess with any of them it’s pretty much going to be a total hack fest. Oh, and while labeled a tourny module there is no scoring information.

This thing is all over the place. Social? Dungeon? Tourny? Seemingly random monster assortments … It needs some SERIOUS tightening up in order to become playable.